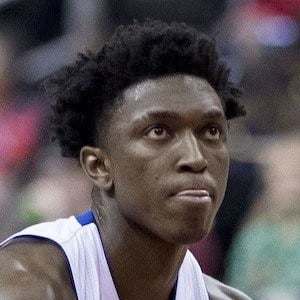 Guard/forward who won four consecutive CIF Division I State Championships at Mater Dei High School in Santa Ana, California. He played one season of college basketball at the University of Arizona, helping the team reach the Elite Eight in the 2015 NCAA Tournament. He was then selected 8th overall in the 2015 NBA Draft by the Detroit Pistons.

He began his Mater Dei High School career in 2010, playing and defending all five positions on the way to the first of four state titles.

He was named MaxPreps.com High School National Player of the Year as well as California Mr. Basketball in 2014.

He is the youngest of five children born to Karen Taylor and Stanley Johnson. His mother was a basketball player who played overseas professionally.

He became teammates with dominant rebounder Andre Drummond on the Pistons in 2015.

Stanley Johnson Is A Member Of