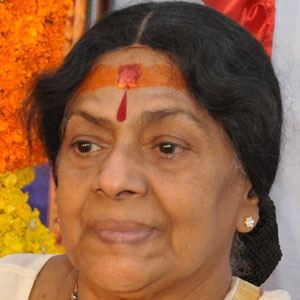 Perhaps best remembered for her National Film Award-winning performance in the 2010 Malayalam and Tamil-language film Gramam, this Indian actress appeared in well over two thousand movies over the course of her more than six-decade career.

During her childhood years, she trained as a dancer and toured throughout India with her cousins and fellow performers Padmini, Ragini, and Lalitha Travancore. She appeared in her first Tamil movie, Or Iravu, when she was just eleven years old.

In 2005, she was awarded both Filmfare and Asianet Lifetime Achievement Awards.

Her marriage to film director A. Bhimsingh lasted from 1959 until Bhimsingh's death in 1978 and resulted in an actor son named Suresh.

She and fellow Indian actress and dancer Shobana were both awarded the prestigious Padma Shri for their contributions to the arts.

Sukumari Is A Member Of