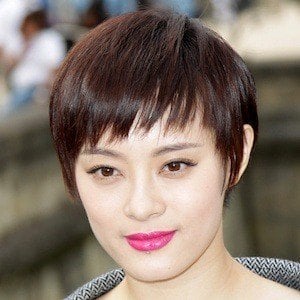 Chinese actress who is endearingly referred to as "Queen of Television" by both her critics and her fans. She is most recognized for her performance in the 2003 television series Goddess of Mercy where she played the character of An Xin.

Her debut in entertainment came in 2001 when she starred in the series Star Search where she reached the finals. She then branched out into dramatic television when she debuted in Romance in the Rain. She then went on to star in film in 2001 where she played the role of Ling Ling in Ge Ge Shu.

She was born and raised in Shanghai, China. She married Deng Chao in 2010. They have two children named Deng Hanyi and Deng Hanzhi together.

She starred alongside Liu Tao in the 2015 television series The Legend of Mi Yue.

Sun Li Is A Member Of