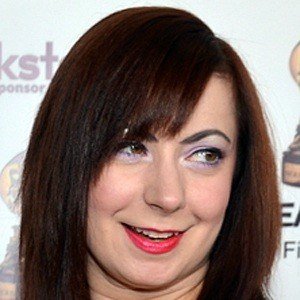 Actress and filmmaker known as one-half of the Soska Sisters alongside her twin, Jen. They have become known by the pseudonym The Twisted Twins for their original horror films Dead Hooker in A Trunk, American Mary, and ABCs of Death 2. The pair also host the horror game show Hellevator and wrote Marvel's Black Widow.

She and her sister's love of horror films stemmed from constant begging to watch the 1980s classic Poltergeist. Not long after, they both resolved to work in horror film, first as actresses and then as filmmakers.

The Soska sisters have released several comic books and graphic novels including Kill-Crazy Nymphos Attack! and issues of Marvel's Secret Wars Journal and Guardians of Infinity.

She and her sister Jen were born on their mother's birthday. They are identical twins.

In 2016, she and her sister signed on to direct the remake of the classic David Cronenberg film Rabid.

Sylvia Soska Is A Member Of