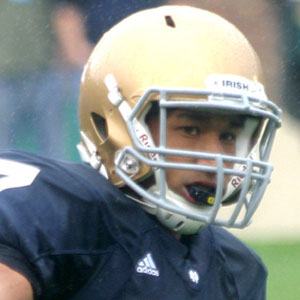 Wide receiver for the University of Notre Dame who played a large part in the Fighting Irish run to a National Championship where they fell short in a losing effort to Alabama.

He was a four-star recruit coming out of Gainesville High School in Georgia. He was initially supposed to play college ball at Stanford but switched to Notre Dame.

He helped the Fighting Irish make appearances in the 2010 Sun Bowl, the 2011 Champs Sports Bowl, and the 2013 Pinstripe Bowl.

He comes from a football family. His father was a national champion with the Fighting Irish in 1988 and his uncle Phillip Daniels played 15 seasons in the NFL as a defensive end.

He played in the 2013 BCS National Championship game alongside teammate Manti Te'o.

TJ Jones Is A Member Of