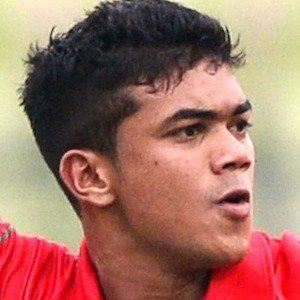 Bangladeshi cricketer who was his country's leading wicket-taker at the 2015 Cricket World Cup. He's known for his fast-pace bowling, averaging more than 140 KPH (87 MPH).

He started playing cricket when he was 11 years old and made his first-class debut when he was only 16. The next year, he was a member of Bangladesh's U19 World Cup team.

He's studied at the American International University of Bangladesh. He was suspended in 2016 for using illegal bowling actions.

He was born to Abdur Rashid and Sabina Yasmin.

He and Mustafizur Rahman have been teammates on Bangladesh's national team.

Taskin Ahmed Is A Member Of