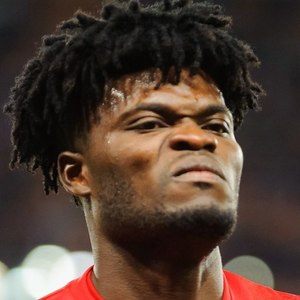 Midfielder known as Thomas who joined Atletico Madrid in 2013. After spending a couple years on loan, he appeared in his first game with Atletico in 2015. He began playing for Arsenal FC in 2020, and has also played for the Ghana national team.

He grew up playing with Odometah in Ghana before joining Atletico's youth team in 2011.

While on loan, he played for Mallorca in the Segunda Division and Almeria in La Liga, although Almeria was relegated that same year.

He grew up in Odumase Krobo, Ghana. He shared an Instagram picture with his mother in June 2015.

He's played with Yannick Carrasco while on Atletico Madrid.

Thomas Partey Is A Member Of