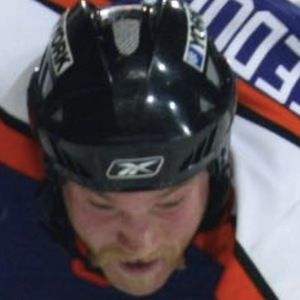 Former left winger who played in the NHL from 2000-2010 for several teams, including the Philadelphia Flyers and the Anaheim Ducks.

He played for the Kelowna Rockets in the Western Hockey League.

In 2011, after his playing career was over, he was became assistant coach of the Trenton Titans in the East Coast Hockey League.

He grew up in Redwater, Alberta.

He fought New York Rangers enforcer Colton Orr in a game and had to be removed from the ice on a stretcher after taking an overhand right to the face.

Todd Fedoruk Is A Member Of