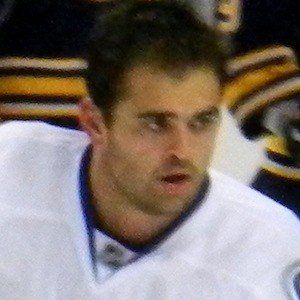 NHL enforcer who established his reputation for fighting and taking penalties. This reputation was solidified in a game against the Los Angeles Kings in which he earned 27 penalty minutes in one second of ice time as a member of the Vancouver Canucks.

He played for the Plymouth Whalers of the Ontario Hockey League, where he showed an ability to score, putting up 42 goals and 22 assists in the 2006-2007 season.

Keith Olbermann once called him a "boxing hobo on skates." In 2013-2014, his one full NHL season (he played in parts of others), he led the league with 213 penalty minutes.

He has a brother named Tim who also played in the NHL as well as a younger sister.

Although not known for his scoring, he netted his first career NHL goal against All-Star goalie Roberto Luongo.

Tom Sestito Is A Member Of