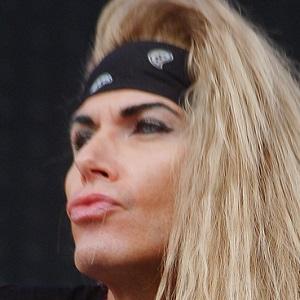 Known best by his stage name "Lexxi Foxx," this bassist and comedian is famous for his work with the heavy metal parody band Steel Panther. His glam group's humorous hit songs include "Fat Girl (Thar She Blows)" and "Death to All but Metal." His departure from the band was announced in July 2021.

In the early years of the 21st Century, he began spending every Monday night performing with a band called Metal Shop. He and other members of Metal Shop eventually renamed their band Steel Panther and produced a debut album titled Hole Patrol.

Based out of Los Angeles, California, he and his bandmates toured throughout both Europe and Australia.

He and singer Ralph Saenz, a.k.a. "Michael Starr," were both founding members of Steel Panther.

Travis Haley Is A Member Of