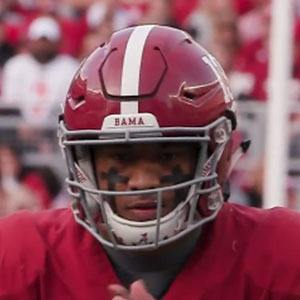 Quarterback who led the University of Alabama to back-to-back national championships following the 2017 and 2018 seasons. He was a runner-up for the 2018 Heisman Trophy. In 2020, he was selected fifth overall in the NFL Draft by the Miami Dolphins.

He attended Saint Louis School in Honolulu, Hawaii, where he was the top-ranked high school football player in the class of 2017.

He entered the 2018 College Football Playoff National Championship as the second half starter for the Crimson Tide after the team's starter Jalen Hurts was benched. Tagovailoa went on to seal the victory for the Crimson Tide with a game-winning touchdown pass in overtime, completing a 13-point comeback.

His parents' names are Diane and Galu. He has three younger siblings.

He played under head coach Nick Saban during his time at Alabama.

Tua Tagovailoa Is A Member Of