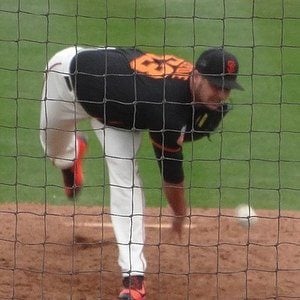 Professional pitcher who was a first-round draft pick of the San Francisco Giants in 2014. He played college baseball at Vanderbilt University, where he won the 2014 College World Series with the Commodores.

He decided to attend Vanderbilt despite being a first round pick out of high school in 2011, taken 21st overall by the Toronto Blue Jays.

As a sophomore in 2013, he recorded more than 100 strikeouts with an ERA under 2.40. His performance earned him consideration for the Golden Spikes Award and the Dick Howser Trophy.

He grew up with his older brother Kyle, raised by Walter Beedle and Cheryl Rivers. In November 2017, he married actress Allie DeBerry.

Tyler Beede Is A Member Of