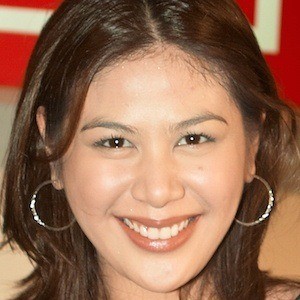 Television actress and host who first rose to fame playing Nora Ferrer in the GMA soap opera Sinasamba Kita. She later went on to host shows like Wowowee, Pilipinas Win Na Win, and Talentadong Pinoy. Twice in a row she took the title of Best Female Variety Show Host at the PMPC Star Awards for TV for Wowowee.

She earned one of her first acting roles in 2002 playing Lilian Almendras in the GMA cine novela Ang Iibigin Ay Ikaw.

In addition to her small screen appearances, she's acting in films like Mulawin The Movie and My Bebe Love.

She gave birth to a daughter named Heather Fiona while she was a teenager.

She appeared alongside Barbie Forteza and Krystal Reyes in the 2013 television series Anna Karenina.

Valerie Concepcion Is A Member Of