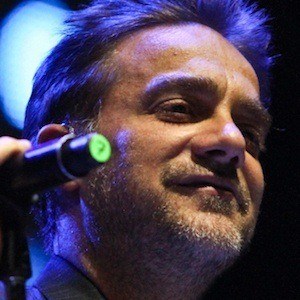 Co-founder and vocalist of the ska/rock band Los Fabulosos Cadillacs who sang with the band until 2001 when he elected to go solo. Solo efforts of his include the albums self-titled, Los Rayos, Los parajos, Solo un Memento and Vicentico 5.

Active as a musician since 1978, he helped form Los Fabulosos Cadillacs in 1984.

His band's popularity peaked after winning a MTV Latino Video Music Award in 1994 for their single "El Matador."

His real name is Gabriel Julio Fernández Capello. He has sons named Florián and Vicente with his wife, actress Valeria Bertuccelli.

He and Flavio Cianciarulo were Los Fabulosos Cadillacs' co-founders.

Vicentico Is A Member Of