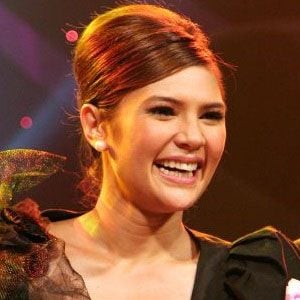 Born Sharon Garcia Cruz and better known by her stage name Vina Morales, this Filipina entertainer starred in the 2014 movie Bonifacio: The First President; acted in television series such as Where Ka Elisa? and Agua Bendita; and recorded pop music albums titled Vina, Forbidden, Easy to Love, and No Limits.

She rose to fame after winning the Cebu Pop Music Festival's first prize with her English-language performance of the song "Hope." She went on to make her acting debut in a 1986 feature film titled Bound Heart.

Over the course of her career, she made numerous appearances on the Philippine variety show ASAP.

A native of Cebu, Philippines, she grew up with an actress and model sister named Shaina.

She and Jessy Mendiola were both series regulars on the 2013-2014 Philippine telenovela Maria Mercedes.

Vina Morales Is A Member Of