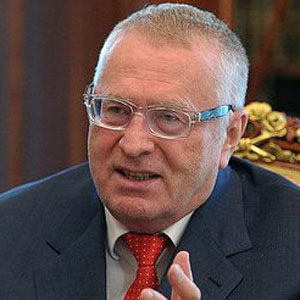 In the early 1990s, this Russian politician founded and began leading the Liberal Democratic Party of Russia. He is well known for stirring controversy through both his political and his personal views and actions.

After graduating from Moscow State University, he served in the military. He later returned to school and earned both a Ph.D. in philosophy and a J.D.

In 1991, he ran for President of Russia; he ultimately finished the race in third place and with nearly eight percent of the vote.

His marriage to Galina Lebedeva resulted in a politician son named Igor Lebedev.

He served as Vice Chairman of the State Duma under the presidential administrations of Vladimir Putin and Dmitry Medvedev.

Vladimir Zhirinovsky Is A Member Of