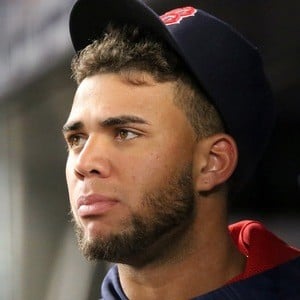 Cuban professional baseball player who is known for his work as a second baseman and for being a switch hitter. He is best recognized for playing with the Chicago White Sox of the MLB.

He began his baseball career playing for Cienfuegos of the Cuban National Series in 2012. In June of 2014, he obtained permission from the Cuban government to pursue a career with the MLB. He joined the Boston Red Sox and made his major league debut in September of 2016.

He hit his first major league home run off Jake Arrieta in a game against the Chicago Cubs on July 26, 2017.

He was born and raised in Abreus, Cuba.

As a player for the Chicago White Sox, he played alongside Lucas Giolito, Jose Abreu, and Tim Anderson during their 2018 season.

Yoan Moncada Is A Member Of