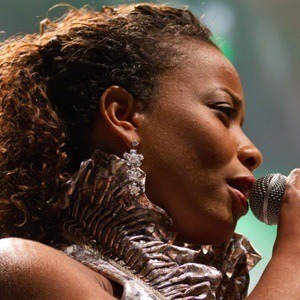 Angolan singer most well known for her 2014 album Filho Meu. She is particularly known for popular singles like "Voce Me Abana," "Volta Amor" and "Nao Entendo."

Raised in a musical family, she first made a name for herself winning UNESCO's Golden Voice of Africa in 1995.

She has served as a goodwill ambassador for Angola with UNAIDS and advocated for the fight against malaria and HIV in her home nation.

Her father, Orlando Mendes Semedo, was a music teacher. Her mother, Maria de Fátima Coimbra, was also interested in music.

Both she and Anselmo Ralph are popular singers from Angola.

Yola Semedo Is A Member Of