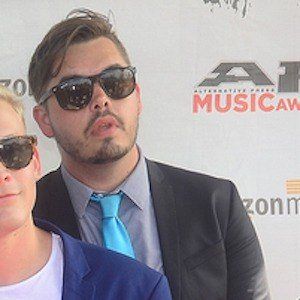 Rhythm guitarist for the four-piece pop punk and symphonic rock band Set It Off. The group has released charting albums called Cinematics and Duality.

He and fellow Set It Off member Austin Kerr were in a band together prior to Set It Off's formation.

Touring for the album Duality, he and Set It Off traveled with Black Veil Brides and Falling in Reverse.

He is from Clearwater, Florida and studied at the University of South Florida briefly.

Cody Carson's successful YouTube video of him singing All Time Low's "Coffee Shop Soundtrack" at the House of Blues in Cleveland helped him confirm that he wanted to be a rock star. He subsequently dropped out of college with Zach being amongst the first to follow his lead.

Zach Dewall Is A Member Of