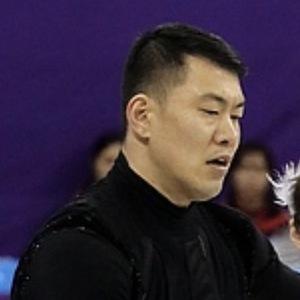 Chinese pair skater who has gained fame for his career skating with Yu Xiaoyu, including as the winners at the 2018 Chinese Figure Skating Championships. He also won the 2017 Asian Winter Games with her.

He began skating competitively at the junior level in 1998. He first paired with Zhang Dan, with whom he won a gold medal at the 1998-99 Junior Grand Prix.

He finished as a silver medalist skating in a pair with Yu Xiaoyu at the 2017 Grand Prix Final. The pair also finished in second at the Four Continents Championships in 2015.

He shares a son with his wife Ju Chi.

He and Eric Radford both competed in pair figure skating at the 2018 Winter Olympics.

Zhang Hao Is A Member Of