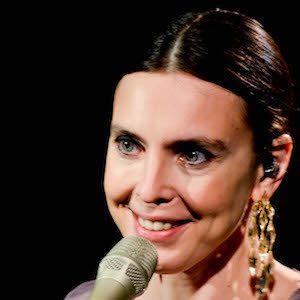 Singer-songwriter trademarked for her melancholic pop music, she debuted in 1990 and would go on to release over a dozen successful albums over her nearly three decade long career.

Her first album, Enguiço, which was released in 1990, consisted primarily of song covers. Most of the songs were part of a slate of songs she performed in restaurants and bars.

Her cover of Caetano Veloso's "Naquela Estação" was included in the soundtrack of the soap opera Rainha da Sucata.

Her father, Carlos Calcanhotto, was an Italian musician. Her mother was a Brazilian dancer. She was married to film director Suzana de Moraes from 2010 until 2015.

Close friends with Marisa Monte, the fellow singer was featured on her 2008 album Maré on their rendition of Marina Lima's "Três."

Adriana Calcanhotto Is A Member Of