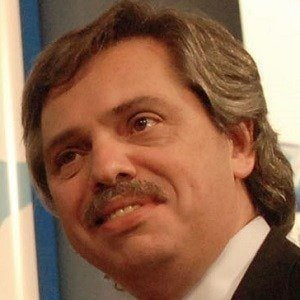 Argentine attorney and politician who served as Cabinet of Ministers Chief during the administration of President Nestor Kirchner. He was sworn in as President of Argentina in December 2019.

He studied law at the University of Buenos Aires and subsequently worked for the Argentine Chamber of Deputies.

He began serving on the Buenos Aires Legislature in June of 2000.

He married Marcella Luchetti; the couple separated in 2005. He later pursued a relationship with Vilma Ibarra, an Argentine congresswoman.

He and Juan Romero were contemporaries and fellow Argentine politicians.

Alberto Fernández Is A Member Of