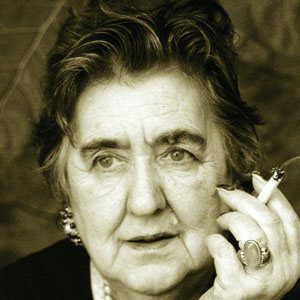 Award-winning Italian poet whose work explored the intersection of insanity and creativity. She is particularly remembered for L'altra verita: Diario di una diversa, a 1986 poetic memoir.

She began writing at a young age and caught the attention of Giorgio Manganelli, Pier Paolo Pasolini, and other Italian authors.

She was confined to a mental institution for over a decade, beginning in 1964. Her 1986 masterpiece, The Other Truth: Diary of a Dropout, was inspired by this experience.

She was born in Milan, Italy, and she died in her home city at the age of seventy-eight.

Her writing had an emotional, mystical bent and was influenced by the work of Rainer Maria Rilke.

Alda Merini Is A Member Of