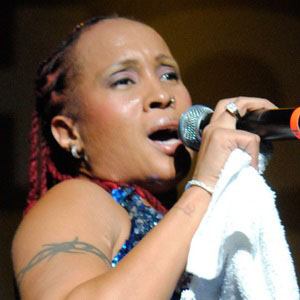 Singer better known as the Queen of Soca who won the Barbados Song Contest in 1992 with the duet, "Hold You in a Song."

She moved with her mother to the island of Barbados at age eleven.

In 2010 she released an album called Caribbean Queen, which she worked on with other famous artists like reggae singer Shaggy.

She lives on a privately owned horse farm with husband Edward Walcott. They have a daughter named Saharan together.

She was able to promote herself on NBC's Today Show in Matt Lauer's segment.

Alison Hinds Is A Member Of