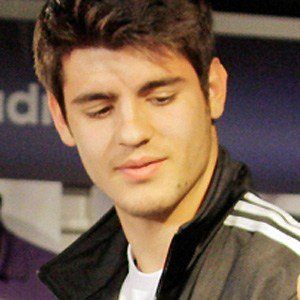 Professional soccer player who joined Chelsea as a striker in 2017. In 2019, he went to Atlético Madrid on loan. He has previously played for teams such as Juventus and Real Madrid. He became a member of the Spanish national team in 2014.

He spent his youth career playing for Atletico Madrid's, Getafe's, and Real Madrid's youth clubs. He made his senior debut in 2010 for Real Madrid.

He won the Champions League with Real Madrid in 2014. He then spent two years with Juventus, winning the domestic double in both years.

He married Alice Campello in June 2017. They welcomed twins, Alessandro and Leonardo, on July 29, 2018 followed by a son named Edoardo in September 2020.

He played alongside Cristiano Ronaldo on Real Madrid.

Álvaro Morata Is A Member Of