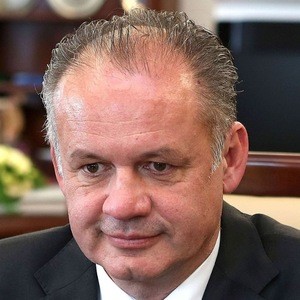 Politician, entrepreneur, writer, and philanthropist best known for being the fourth President of Slovakia. Running as an independent candidate, he was elected in 2014.

He studied electrical engineering and applied for Communist party membership but was rejected. He moved to the United States in 1990. He then founded Triangle and Quatro, both Slovakia based hire-purchase companies. In 2006, he founded a non-profit charitable organization called Good Angel which helps suffering families.

He is known for supporting the Kosovo Independence and is also in favor of recognizing Kosovo as an independent sovereign state. He has also come out against Russia over the Ukraine conflict and supports Russian sanctions.

He married Martina Kiskova and together they have five children.

While elected President in 2014, he served under Prime Minister Robert Fico and was preceded by Ivan Gasparovic.

Andrej Kiska Is A Member Of