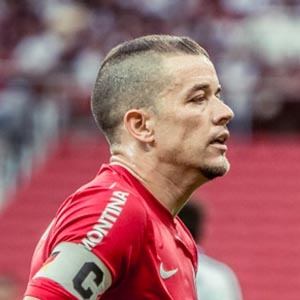 Argentine professional football player who is known for playing as an attacking midfielder for the Internacional club as well as the River Plate club. He is also known for his work as a midfielder on the Argentina national team.

He started his youth career with the River Plate club in 1991. He then made his professional debut with the squad in 2000. After playing with the Under 20 and Under 23 national teams, he joined the 23-man Argentine squad in 2003.

He is known for having won the South American Footballer of the Year award in 2010 and the Silver Ball award at the 2001 FIFA World Youth Championships.

He was born and raised in Buenos Aires, Argentina and shared a photo with his children through Instagram in September of 2018.

He played alongside Victor Cuesta and Javier Mascherano at the 2004 Summer Olympics tournament where Argentina won the gold medal.

Andres D'Alessandro Is A Member Of