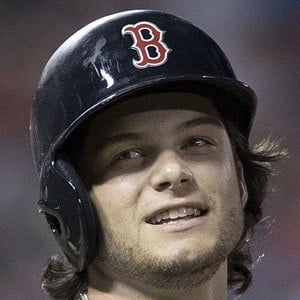 Outfielder who made his MLB debut with the Boston Red Sox in August of 2016. He was a 1st round selection by the Red Sox in the 2015 draft. He helped the Red Sox win the 2018 World Series.

He played college baseball for the University of Arkansas Razorbacks, where he was named SEC Player of the Year and Baseball American College Player of the Year after leading the SEC in batting average, home runs and on-base percentage. He was drafted by the Cincinnati Reds in 2013, but did not sign with the organization.

He was born to parents Chris and Jill Benintendi. He has sisters named Olivia and Lily.

In the 2016 ALDS, he swatted his first postseason home run against the Indians' Trevor Bauer.

Andrew Benintendi Is A Member Of