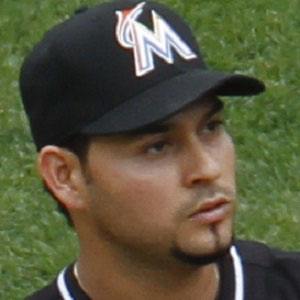 MLB pitcher who threw a no-hitter in his 13th career start with the Florida Marlins. He was traded to the Detroit Tigers in 2012 and later went on to pitch for the Atlanta Braves and Washington Nationals. He helped the Nationals win a World Series Championship in 2019.

He first signed with the Boston Red Sox, but never made it out of the Minor Leagues until he was traded to the Florida Marlins.

On April 26, 2013, he set the record for most strikeouts in a single game by a Detroit Tigers pitcher, with 17 against the Atlanta Braves.

He divorced from his second wife Ana in 2007, shortly after their 3-month old son Alan died of dengue fever.

As a Minor Leaguer he was involved in a trade that brought Josh Beckett to the Boston Red Sox.

Anibal Sánchez Is A Member Of