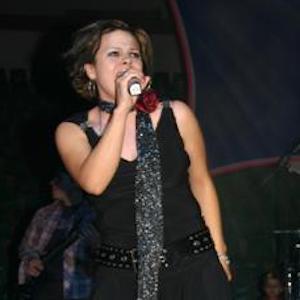 Spanish-language Christian singer who first became known in 1995 for the release of her debut album Volar Libre. She was also a member of the Christian rock band Rojo from 2000 until 2002.

A singer from an early age, she began her music education at the age of twelve. She was also a violinist and vocalist for her parents' Mariachi group, Los Salmos.

Her father, Eliezer Moreno, was a pastor. Both Eliezer and her mother, Linda, were Mexican immigrants. In 2009, she married her band's drummer, Donnie Serrano. They have four sons, Gianni, Alexio, Nikko and Patrizio.

In 2012, she recorded the duet "Demente" with Juan Carlos Rodriguez and Evelyn Herrera of Tercer Cielo.

Annette Moreno Is A Member Of