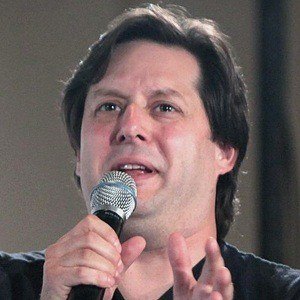 Improvisor and comedian recognized as a member of the improv team Death by Roo Roo and as a co-host on ASSSSCAT3000. He is also one half of the impersonation duo Trump vs. Bernie.

He began his career in the early to mid 2000s appearing shorts like My Wife, the Ghost and The Incredible Drunk.

He has appeared in numerous UCB Comedy Originals and was a regular on The Chris Gethard Show.

Throughout his career, he has worked with countless popular comedians including Upright Citizens Brigade's Matt Walsh and Matt Besser.

Anthony Atamanuik Is A Member Of