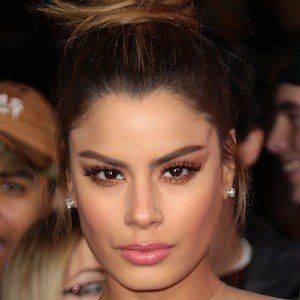 Beauty queen notable for earning the title of Miss Colombia 2014 and finishing as the runner-up at the Miss Universe 2015 pageant. She was mistakenly given the crown of Miss Universe by Steve Harvey before Harvey apologized and crowned Miss Philippines as the true Miss Universe. She later became a finalist on Celebrity Big Brother.

She is a cousin of Miss Colombia 2013 and Miss Universe 2014, Paulina Vega. She earned representation with Sofía Vergara's agency Latin World Entertainment.

She was born in Sincelejo, Colombia and moved to Barranquilla when she was 7 months old. She is the youngest of five children. In 2017, she dated Italian entrepreneur and DJ Gianluca Vacchi. In 2019, she got engaged to DJ Cedric Gervais, but they later separated. In 2020, she dated entrepreneur Ali Jassim.

She finished just behind Pia Wurtzbach in the Miss Universe 2015 competition.

Ariadna Gutiérrez Is A Member Of