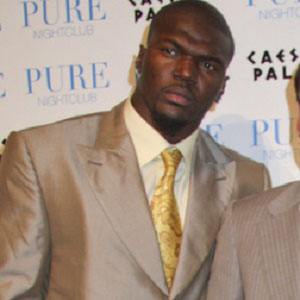 Super Bowl champion defensive end with the New Orleans Saints who was initially drafted by the Jacksonville Jaguars in the final round of the 2004 NFL Draft. He finished his career in 2010 with the Philadelphia Eagles.

He played collegiately at the University of Florida where he was a part of the 2000 SEC Championship team and was named Second-team All-SEC on two occasions.

He married actress Khadijah Haqq on July 17, 2010 and they had a son named Christian in November of 2010. He also has children named Celine and Bobby III.

In his first playoff game for the Saints, he made a hard, legal hit on Arizona quarterback Kurt Warner that briefly knocked Warner out of the game. The hit was described by safety Darren Sharper as a game-changing play.

Bobby McCray Is A Member Of