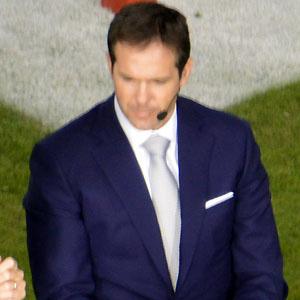 Former NFL quarterback who played for the Denver Broncos, the Miami Dolphins, the Tampa Bay Buccaneers, and the Chicago Bears during his 10-year career.

He was named Rose Bowl MVP during his senior season at the University of Michigan.

He won his only Super Bowl title, XXXIII, as a back-up with the Tampa Bay Buccaneers.

He was born to Hall-of-Fame quarterback Bob Griese.

He was teammates with star defender Charles Woodson at the University of Michigan.

Brian Griese Is A Member Of