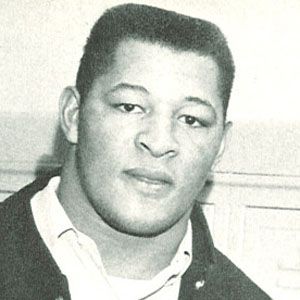 University of Iowa legend who played offensive guard and broke the color barrier in college football, and had his number retired by the team.

He joined a floundering Iowa football team that had only one winning season its last 10 years, and helped take the team to No. 9 in the polls his rookie season.

He was on Sports Illustrated's College Football preview edition in 1955, the first African American on the cover of the respected publication.

His father died when he was a year old, and his mother raised him and his siblings through the Great Depression.

He committed to play for Ohio State and their legendary coach Woody Hayes, but then changed his mind, saying he was treated better at Iowa.

Cal Jones Is A Member Of