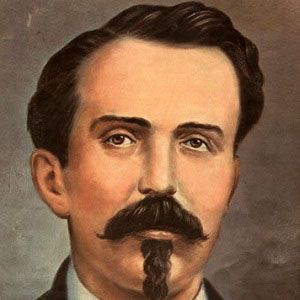 Remembered as the catalyst for the Ten Years' War, this plantation owner declared Cuban independence in 1868 and liberated his slaves, encouraging them to join him in a rebellion against Cuba's Spanish-controlled government. He was killed by the Spanish in 1874, but his actions paved the way for the Cuban War of Independence of the late 1890s.

Before becoming a political revolutionary, he pursued a career as a musician, most notably co-writing the song "La Bayamesa."

His visage has been featured on Cuba's ten and one hundred pesos bills.

Nearly a century apart, Cespedes and Che Guevara both led revolutions in Cuba.

Carlos Manuel de Céspedes Is A Member Of