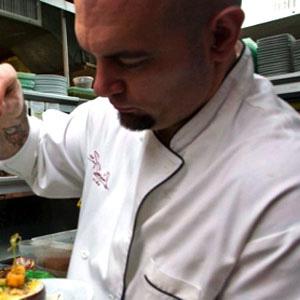 American chef who rose to fame as a judge on the Food Network reality series Chopped.

He began working as a restaurant dish washer at age thirteen.

He served as Executive Chef and owner of two New York restaurants: The Stanton Social and Beauty & Essex.

He grew up with one older sister and two older brothers. He married Taryn Santos in 2009.

He had a small role in the 2005 Will Smith film Hitch.

Chris Santos Is A Member Of