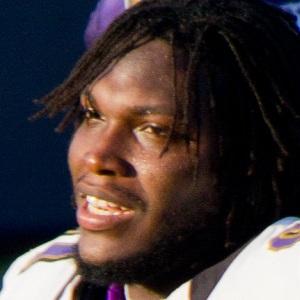 Star pass rusher of the Alabama Crimson Tide who joined the NFL's Baltimore Ravens in 2012, with whom he won Super Bowl XLVII.

He was a two-time BCS champion with the Crimson Tide, anchoring the nation's best defense and finishing as a finalist for both the Lombardi Award and the Butkus award.

In Super Bowl XLVII he had the critical forced fumble, stripping San Francisco 49ers running back LaMichael James of the ball, leading to a Ravens score on the ensuing possession.

He was born in Eufaula, Alabama. His mother's name is Lisa Upshaw.

He became teammates with tight end Ed Dickson on the Ravens in 2012, both players helping the team capture Super Bowl XLVII.

Courtney Upshaw Is A Member Of