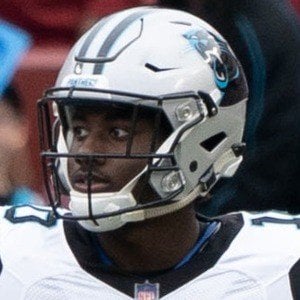 Wide receiver who was selected by the Carolina Panthers in round 2 and pick 40 in the NFL draft in 2017. He has over 170,000 followers on his curtis_samuel4 Instagram account.

His parents are Nicole Samuel and Curtis Council.

He and Jalin Marshall played wide receiver for Ohio State.

Curtis Samuel Is A Member Of