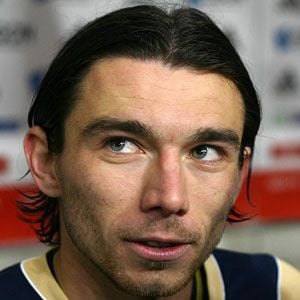 Croatian midfielder and full-back best known for his time with teams like the Super League Greece club Panathinaikos FC. He has represented Croatia at international events like the 2014 FIFA World Cup.

He was born in Nasice and made his youth debut with the Croatian Third Football League club NASK in 1998.

He helped Panathinaikos clinch the Greek Cup championship in 2014.

He has a daughter, Lana Pranjic, with a woman named Vlatka.

He and goalkeeper Alexandros Tzorvas both won titles with Panathinaikos.

Danijel Pranjic Is A Member Of