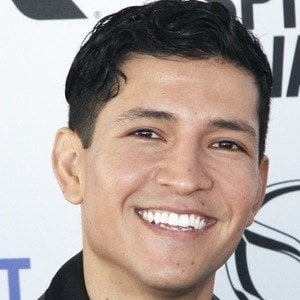 Colombian/Mexican-American actor who broke through in 2018 for his roles in the TV series On My Block as Mario Martinez and the film Assassination Nation as Diamond. He was also cast as Chip in Valley Girl and 2020's Ton Gun: Maverick.

While attending New York University's Tisch School of the Arts, he made his TV debut in The Affair. He also booked roles in NBC's Blindspot and a feature called Rapid Eye Movement while in school.

He was a guest-star in an episode of Orange Is the New Black and had a three episode arc in The Gifted.

He was born in Chicago, Illinois. He has a sister.

He and Bella Thorne were both cast in Assassination Nation.

Danny Ramirez Is A Member Of