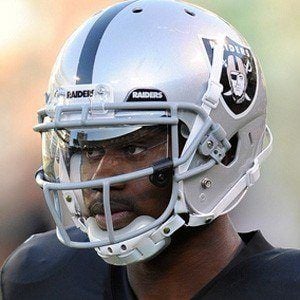 Speedy NFL wide receiver who was selected seventh overall by the Oakland Raiders in the 2009 NFL Draft.

He played college football at the University of Maryland.

He was knocked unconscious by the Pittsburgh Steelers' Ryan Mundy during a game in Oakland.

He earned first team all-state honors and was named PrepStar All-American during his career at McDonogh High School in Owings Mills, Maryland.

He and Michael Crabtree were both viewed as up-and-coming wide receivers early in their NFL careers.

Darrius Heyward-Bey Is A Member Of