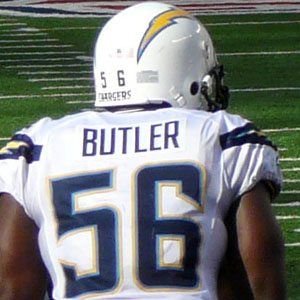 NFL linebacker who was drafted by the San Diego Chargers in 2010. He became a team captain by his fourth season and signed a multi-year deal with the team in 2014.

He played college football for the Washington Huskies, posting 159 solo tackles during his 4-year career there.

The Chargers traded up 12 spots to take him in the first round of the 2010 NFL Draft.

His mother, Janet Rice, raised him as a single parent.

He stripped the ball and recovered a fumble from Cincinnati Bengals running back Giovani Bernard during the Wild Card round of the 2013 NFL Playoffs.

Donald Butler Is A Member Of