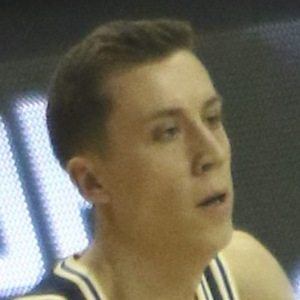 Three-point specialist who had his breakout season with the Miami Heat in 2019-20. He helped the Heat reach the 2020 NBA Finals, where they were defeated by the Los Angeles Lakers. He first gained notoriety for his three-point shooting acumen as a member of the University of Michigan basketball team.

Before transferring to Michigan, he helped lead the NCAA Division III Williams Ephs to the championship game of the 2014 NCAA Men's Division III Basketball Tournament.

He was named the 2018 Big Ten Conference Sixth Man of the Year. He was part of his first three point shooting competition during the 2020 NBA All-Star Break.

His parents are Elisabeth and Jeffrey Robinson.

Erik Spoelstra became his coach on the Miami Heat.

Duncan Robinson Is A Member Of