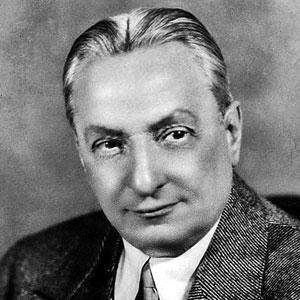 Legendary Broadway producer and creator of the Ziegfeld Follies, a musical revue series popular during the early twentieth century. He later produced Show Boat, The Three Musketeers, and numerous other shows.

The first of his famous Ziegfeld Follies revues was performed in 1907.

He was married to Wizard of Oz actress Billie Burke from 1914 until his death in 1932. Previously, he had married and divorced Polish performer Anna Held.

His stage spectaculars helped capture the attention of Eddie Cantor.

Florenz Ziegfeld Jr. Is A Member Of