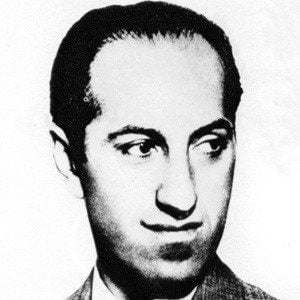 Musician famed for hits such as "An American in Paris," "Porgy and Bess," and "Rhapsody in Blue."

He dropped out of school when he was 15 and became a song plugger for Tin Pan Alley publishing firm Jerome H. Remick and Company.

His songs are among the most-covered of all time, with Louis Armstrong, Dean Martin, Ella Fitzgerald, Kate Bush, Amy Winehouse, Madonna, and countless others all offering up their versions of his classics.

His older brother Ira Gershwin was a frequent collaborator; he worked with George on "Lady Be Good," "Oh, Kay!" and "Of Thee I Sing," which became the first musical comedy to win the Pulitzer Prize for Drama.

His breakthrough hit was "Swanee" from 1919, written with Irving Caesar and popularized by Al Jolson.

George Gershwin Is A Member Of