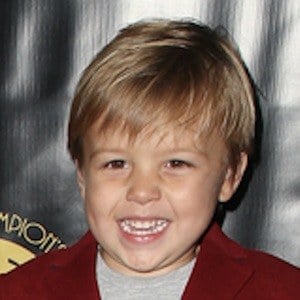 Best known for his role as Tommy Fuller, Jr. on the Netflix series Fuller House. He debuted in February 2016. He and his twin brother Dashiell both play the character.

He signed with the Zuri Modeling & Talent Agency prior to his casting on Fuller House. He was born on December 3, 2014.

He and his brother both portraying the same twin was meant to mirror the original Full House series' casting of Mary-Kate and Ashley Olsen. His twin counterparts from the original series played DJ Tanner's youngest sister Michelle.

He was born and raised in Glendale, California.

He plays the fictional son of DJ Tanner, who is played by Candace Cameron-Bure on Fuller House.

Fox Messitt Is A Member Of