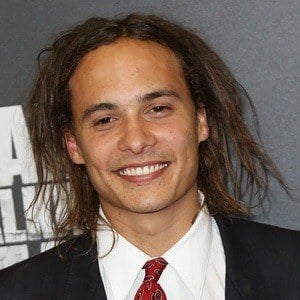 Best known for his role as Tom Riddle in Harry Potter and the Half-Blood Prince, he is also notable for his portrayal of Owen Coffin in the Ron Howard-directed thriller In the Heart of the Sea. In 2015, he began playing Nick Clark on the AMC series Fear the Walking Dead.

He made his cinematic debut at the age of six, appearing as Christopher Henderson in the 1997 film Welcome to Sarajevo.

He took a break from his professional acting career to train at the famous Royal Academy of Dramatic Art (RADA) in London, England.

He and his brother, Seamus, are the sons of actress Naomi Wirthner and Game of Thrones actor Stephen Dillane.

He and Georgia Groome both acted in the 2012 family film Papadopoulos and Sons.

Frank Dillane Is A Member Of