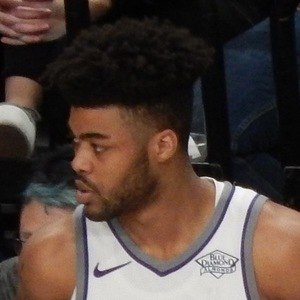 Point guard who rose to widespread fame starting for the University of Kansas Jayhawks. During his 2017 senior season, he was named a first team All-American and the Sporting News Player of the Year, leading Kansas to a #1 seed in the 2017 NCAA tournament. He was selected 34th overall in the 2017 NBA Draft by the Sacramento Kings.

He was named to the second team All-Big 12 following his sophomore year at Kansas.

He helped lead the US youth national basketball team to a gold medal at the 2015 World University Games. He was also named the final's MVP.

He played for coach Bill Self during his time as point guard for the University of Kansas Jayhawks men's basketball team.

Frank Mason III Is A Member Of