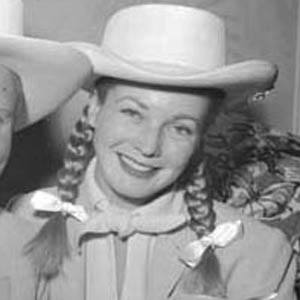 Title heroine of ABC's 1950s popular Western series Annie Oakley, which was about a straight-shooting cowgirl.

Born Betty Jeanne Grayson, she changed her name on the advice of Gene Autry, who gave her a regular part in his own show.

With appearances in dozens of television and film westerns, she became the quintessential cowgirl of her age.

She was married three times, and had one child with her first husband.

She starred opposite Roy Rogers in the 1948 film The Far Frontier, one of her most memorable film roles.

Gail Davis Is A Member Of